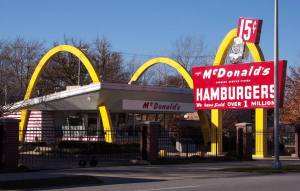 I have previously noted how JC Penney hired Ron Johnson to create a growth strategy for the company. He implemented a new strategy, and as anyone would likely realize, sales went down. Why, as I wrote in the prior post, is because existing customers see the change, and don’t like it in many cases before new customers can be attracted to it. Since JC Penney is a public company, their Board could not accept a sales reduction and they eventually fired Mr. Johnson so they could return to a previously unacceptable strategy, which appeared to look better after the sales loss due to the change.

How does this tie to McDonald’s? Most people are unaware of the history of McDonald’s. It was at one time a BBQ restaurant using what we have come to call the “drive in” with carhops business model. They were an early pioneer of this concept and were very successful. Even though the concept had its downside (loitering teenagers, less than wholesome food, etc.) the overall growth continued. However, the McDonald brothers were not sure it was sustainable.

They took the bold and risky move of thinking about reinventing their business. The result was the McDonald’s of fame, hamburgers, cheeseburgers, etc. A very limited menu based on efficiency of operations, and all that meant. They focused on limited choice and lower prices. The initial results were as one might expect … dismal.

Their current customers, for the most part, did not like the new approach and left. New customers did not replace them quickly. However, since they were not beholden to a disconnected Board of Directors, they were able to stick to their convictions. Roughly four months after the shift, sales began to rise and rise and…

As we all know, the brothers eventually sold their concept to Ray Kroc who turned it into a mega-business. But that never would have happened if the McDonald brothers didn’t realize they needed a different strategy to grow and would take the hit to make that happen. Too bad folks like the McDonald brothers weren’t on the Board of a company like JC Penney.